Palma is a city that can easily be explored on foot. Its maze of quaint, narrow streets invite you to lose yourself and wander around on a gentle stroll, taking in the history, whether in company or alone, but ambling in an unhurried way.

As fervent devotees of the city, we want you to discover it for yourself and let yourself to be seduced by Palma de Mallorca old town.

Of all the districts to choose from, the historic centre is the best place for getting acquainted with the city. Tucked away in Palma’s streets are unique buildings, monuments and museums of different eras that will transport you back in time.

Immerse yourself in its history, its legends and its anecdotes, which combine to make it a city with a unique heritage. Start exploring and let yourself be carried away…!

Staying at our Hotel Boutique in Palma Posada Terra Santa, in the heart of the old quarter, makes it easy to get anywhere in the area. You could even choose our deluxe Samaritana Suites, for a more exclusive and luxurious stay, also in the centre and only a few metres from the cathedral.

If you are only interested in seeing the old quarter of Palma de Mallorca, but want to avoid the hubbub of the centre, why not stay at finca Son Catxo, which is only 30 minutes from the capital by car. It lies in a natural setting in a most traditional Mallorcan landscape. 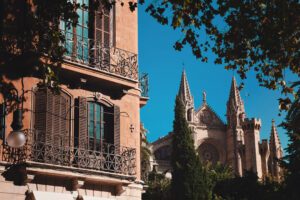 An absolute must-see is La Seu, Mallorca’s cathedral, a masterpiece among Gothic churches, which stands facing the waves on the seafront (Paseo Marítimo) and is located next to the Almudaina Palace.

Both symbolise the meeting of cultures that suffuse the city. The cathedral is also an expression of art, and houses in its interior works by Gaudí and Miquel Barceló.

The cathedral’s best-kept secret and its least well known part is the bell tower and the walkways of its flying buttresses, recently opened to the public: an extraordinary enclave from where it is possible to enjoy a panoramic sea views and all of Palma city. Quite stunning.

In the old town you’ll find veritable gems that reflect the living history of the city. Palma boasts such iconic examples of Catalan modernism as the Forn des Teatre, among others.

But if the old town of Palma de Mallorca is famous for anything it is for the patios that adorn the city in street after street.Some are as imposing as their ancestral homes, others are more sober, but all of them cry out to the visitor to stop and venture into these marvellous architectural wonders.

To discover them, Mallorca’s Tourism Department organises a guided visit involving a tour of the best known patios.

Tour the most emblematic shops 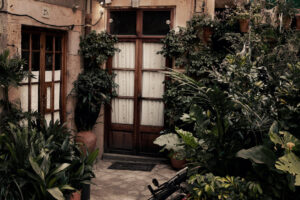 Among the streets and alleyways of the historic old town you’ll also have the chance to delight in a wide range of local craftsmanship and shop windows clamouring for attention at every step. Immerse yourself in the hustle and bustle of the iconic Calle San Miguel. Or to dazzle the senses, stop off at Rialto Living, a totally novel retail concept for finding inspiration, housed in what was formerly one of Palma’s oldest cinemas.

If legendary shops are what you’re after, a stop at La Pajarita confectionary shop will sweeten your day. It has been in the same family for five generations, each generation passing on a taste for over 40 speciality bonbons, as well as a host of other sweets.

Admire the sea at sunset 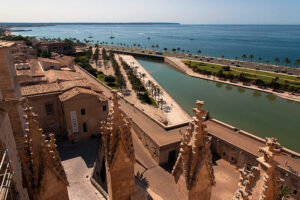 The old town of Palma leads down to the sea, the great protagonist of the city’s and the island’s history, culminating in the Parc de la Mar, located at the base of the cathedral.  This is one of the city’s main parks, a place for breathing in fresh sea air and contemplating all the city’s finest qualities.

To make your tour even more special, what could be better than soaking up the sunset with stunning views of the bay. On summer nights, the park turns into an impressive backdrop for fantastic film and music shows, all under the glimmering stars.

MORE THINGS TO SEE IN THE HISTORIC QUARTER

The old city centre of Palma de Mallorca has a lot to offer, with charming spots where the true ambience of Mallorca still remains.

The Plaza Mayor of Palma, as the epicentre of the city, deserves a special mention, because of its elegant 14th century architecture. One curious fact is that the buildings around the square were home to the offices of the Spanish Inquisition.

Today, it is the centre of social and business life. The square is usually lively, with street artists, musicians and jugglers performing while you have a coffee at one of the many cafés.

The architectural treasures in the old quarter include the Basilica of Saint Francis of Assisi with a combination of Gothic and Baroque styles. Some of the most famous figures from the island are buried within, and there are works of art in the cloisters and a charming interior courtyard.

Those who are interested in contemporary Spanish art cannot afford to miss the Museum of the Juan March Foundation, a collection of the most avant-garde works up to the end of the 20th century. It is housed in a noble 17th century mansion, which adds an extra element of interest to the exhibition. There are works by Dalí, Miró and Picasso, among others.

There is also the Lonja de Mallorca, the Gothic exchange building from 1420 which is famous for its helicoidal columns. The route is a short one and entry is free of charge. Nearby you can find the Es Baluard, the Museum of Modern and Contemporary Art, considered to be one of the most important in the country. We recommend a visit to its terrace to see the views.

Finally, and to learn more about the history of the city, you can explore the Jewish Quarter of Palma, known as the Call Mallorquin. The Jewish quarter extends from Plaza de Santa Eulàlia to Porta d`es Camp. Unfortunately, very little remains of its former structures because they were burned and demolished. However, there are still traces and details that bear witness to what it used to be.

PLACES TO EAT IN THE HISTORIC CENTRE 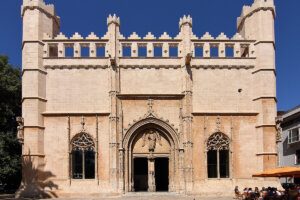 It really is essential to taste the food of Mallorca, and there is no better place to try it than the old quarter.

One of the most popular restaurants of all is La Paloma, which is near to La Lonja. It is famous for its exquisite dishes, especially its focaccia, salmon tartar and octopus. Another restaurant with a great reputation is Bossa Nova Restaurant, with helpful staff, home cooking and careful presentation of each delightful dish. It is located near the cathedral.

The restaurant Pope is famous for its delicious paellas, fast service and fresh fish. These are some of the best-known restaurants, but there is a tempting selection of restaurants in the Centre of Palma de Mallorca for those who love good food.

After a great dinner, why not enjoy a long drink or a cocktail in the distinguished Salón Inglés in our hotel Posada Terra Santa? It is the perfect way to end the day.

Finish in the heart of the old town 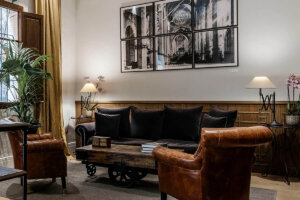 After a tour of the old town of Palma de Mallorca we suggest you have a drink at one of the places that best conveys the essence of the city. Just a stone’s throw from Parc de la Mar is Posada Terra Santa, our hotel with more than 500 years of history. Call in at the Salón Inglés, an intimate and singular venue that is a byword for exclusivity, calm and repose. Sip a delicious drink or a comforting coffee to savour your memories of the day and let yourself be transported by the magic of a city that has been cultivating it for centuries. 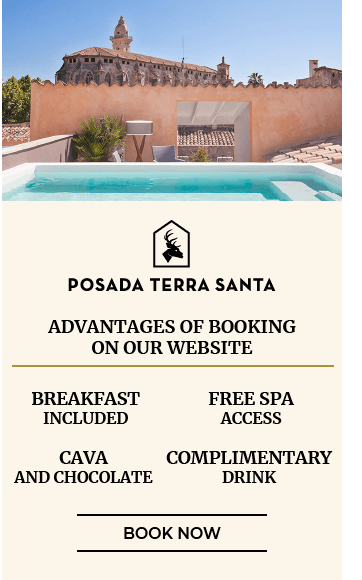 Winter is coming in Spain, in a few weeks the year 2022 will be over, and you are probably looking for a destination for your next holiday. Palma de Mallorca is a beach destination in Spain, one of the paradise islands within the Balearic Islands....

Formentor Mallorca is one of the most fascinating corners of the Balearic archipelago. In fact, it is a perfect paradisiacal environment to enjoy a dream vacation. Mallorca is famous for hoarding numerous tourist attractions. A good example of this is its charming villages or its...

Southern Europe is packed with destinations that promise gorgeous stretches of sand and sparkling turquoise waters, but few can match the laid-back, Bohemian charms of Mallorca, known as the Jewel of the Balearic Islands. On this beautiful island is the Palma de Mallorca Cathedral, built...

READ MORE
Would you like to work with us? CONNECT

You can find out more about which cookies we are using or switch them off in settings.

This website uses cookies so that we can provide you with the best user experience possible. Cookie information is stored in your browser and performs functions such as recognising you when you return to our website and helping our team to understand which sections of the website you find most interesting and useful.

Strictly Necessary Cookie should be enabled at all times so that we can save your preferences for cookie settings.

This website uses Google Analytics to collect anonymous information such as the number of visitors to the site, and the most popular pages.

Please enable Strictly Necessary Cookies first so that we can save your preferences!